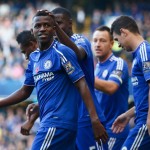 Reports are out claiming that Chelsea are encouraging bids for Ramires this week.

The Sun says Chelsea are prepared to sell midfielder Ramires in order to fund late spending in January.

Bayern Munich and PSG are reportedly interested in the Brazilian, and a bid of £18m could be enough to land him.

Ramires signed a new four-year deal at Stamford Bridge in the summer, but has made only seven Premier League starts this term.

Schweinsteiger : I Know Mourinho Wants Me!