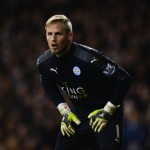 Reports are out claiming that Liverpool are rivaling Manchester United for Leicester City goalkeeper Kasper Schmeichel.

The Sun says Ryan Giggs is keen on the Leicester shot-stopper and would like to see him move to Manchester United.

But Liverpool are planning to rival their fierce rivals in the transfer market, according to the Sunday People.

It’s claimed the Merseysiders have made an enquiry for the Foxes ace as they step up their search for a new No1.

Simon Mignolet has signed a new long-term deal at the club but boss Jurgen Klopp is on the lookout for a high-quality alternative to challenge him.