Reports are out claiming that Barcelona striker Luis Suarez claims Liverpool is the only club he would play for if he ever returned to the Premier League. 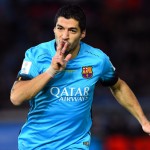 The Uruguay international star scored 82 goals in 133 appearances for the Reds between January 2011 and July 2014, and was named PFA Player of the Year in 2014.

Surez is currently content at Barcelona but says there is only one place on his mind if a return to the UK was to ever pop up on his agenda.

“You never know what might happen in the future, but if I were to return to England it would only be to play for Liverpool and never for another team,” Suarez told ESPNFC.

“I’ve missed the fans. The atmosphere is incredible.

“Everyone that has played for Liverpool knows how important the supporters are. They know that they’re in my heart.”