Reports are out claiming that Manchester City defender Eliaquim Mangala is being linked with a return to Standard Liege. 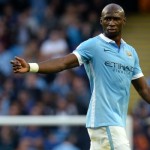 The French international is a former Standard player, having starred there before moving onto Porto.