Reports are out claiming that Chelsea midfielder Cesc Fabregas admits to being ‘surprised’ by the line-up Manchester City boss Manuel Pellegrini fielded in Sunday’s FA Cup clash between the two sides. 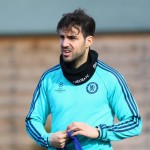 City’s starting XI was made up of a host of second-string players for the Fifth Round tie, with Pellegrini preferring to rest his key players ahead of their Champions League clash with Dynamo Kiev in the Ukraine on Wednesday.

Despite Pellegrini’s reasoning, Fabregas was still baffled by the Chilean’s decision to field a weakened line-up, which was easily dispatched by the Blues 5-1.

The former Arsenal and Barcelona star said : “We played Newcastle (last week) and three days later played against one of the best sides in Europe (PSG),”.

“I was surprised by City’s line-up. I don’t know if it was positive or negative for them. I thought it was negative for us because it put more pressure on us to win.”