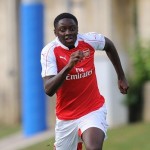 Reports are out claiming that Arsenal U21 coach Steve Gatting is encouraged by the progress of their young players.

Josh Dasilva and Kostas Pileas made their first starts, while Eddie Nketiah came off the bench in defeat to Blackburn Rovers on the weekend.

“There are a lot of games coming up in a short period,” he told Arsenal Player. “We have to rest players for what we think are important games. The key thing is, it gives younger players the chance to experience playing for the under-21s.

“We rested a large amount of players ahead of the Youth Cup semi-final on Monday. We gave young players their debuts and there are a lot of players that will have come out of this with a positive experience. They came out with a lot of credit.

“Overall, I was quite pleased. The disappointing thing was that we lost, especially when we conceded from a corner. We had enough chances to win the game. As the saying goes, you hope it goes well at both ends. We should have scored.

“We had enough chances to win the game comfortably. At the end of the day, it is about scoring goals and not letting them in at the other end. That went the wrong way for us.”