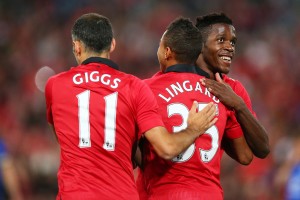 Manchester United picked up their first win under David Moyes with an impressive 5-1 win over an A-League All Stars side in Sydney.

Doubles from Jesse Lingard and Danny Welbeck set the English champions on their way with Robin van Persie rounding off a fine performance.

The Red Devils lost 1-0 to the Singha All Star XI in Bangkok last week, but Moyes’ side were in full-control in front of a massive crowd of 83,127 at the ANZ Stadium.

United’s front-four of Ryan Giggs, Welbeck, Wilfried Zaha and 20-year-old Lingard impacted the game throughout and it didn’t take long for them to hit the scoring front.

Ali Al Habsi : I Could Have Joined Manchester United!