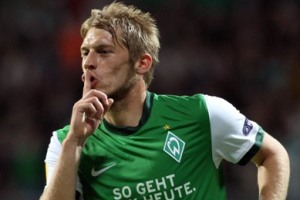 Werder Bremen midfielder Aaron Hunt has pledged his allegiance to the German club and signed a contract extension until June 2014.

The 23-year-old’s previous deal was due to expire at the end of the current campaign but Hunt, who could have qualified to play for England through his English mother, is keen to remain in Germany.

The midfielder made his Germany debut last November in a friendly against the Ivory Coast, and has impressed alongside fellow rising star Mesut Ozil in the Bremen midfield this term.

Hunt is likely to be included in Joachim Low’s squad for this summer’s World Cup, and he believes that by choosing to sign the new deal, his future is well set with Bremen and Germany.