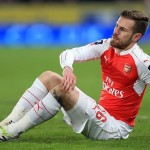 Reports are out claiming that Arsene Wenger expects Arsenal midfielder Aaron Ramsey’s thigh injury to keep him out for four weeks.

Speaking ahead of Sunday’s quarter-final against Watford the Arsenal boss said: “No, he’s not out for the season. I don’t think that.

“His clinical signs are quite positive, and I would say four weeks. It’s a bit worse than what i thought because usually when a player gets injured he stops – I had the feeling it was just a precaution and he would be fit for Sunday.” Olivier Giroud Prepared To Fight For His Place At Arsenal