Aaron Ramsey is confident that Arsenal will be challenging Manchester City for the league title at the end of the season. 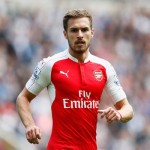 Despite the early criticism of the club’s start to the season, Ramsey believes the Gunners squad is still capable enough of mounting a genuine title challenge.

“My view on it (the criticism) is look at the table after 10 games and let’s see where we are then,” said the Wales midfielder.

“Hopefully that upset at the beginning of the season (2-0 defeat at home to West Ham) will be our only one. If we go on a winning run now, and win our next five or six games, we will be there or thereabouts again.

“We don’t take too much notice of the criticism. We know what we are capable of doing. We know the players we have and it is just important for us to concentrate on that.

“We have a lot of quality in this squad at the moment and a lot of competition for places as well. I am confident that this squad can go and challenge for the title, this season and for many years to come.”