It has been reported that Aaron Ramsey is convinced winning the FA Cup is a game-changer for Arsenal. 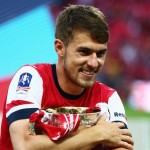 The 23-year-old Wales international midfielder took part in a question and answer session on the official Twitter channel of club sponsor Emirates airline on Wednesday afternoon, and spoke of his determination to build on last season’s success.

“I think now that we’ve won the FA Cup, this team has become hungrier to win things. I’m sure we’ll give it a good go,” said Ramsey, whose goal in extra-time secured a 3-2 win over Hull and ended Arsenal’s nine-season trophy drought.

“(I am looking forward to) just getting back into it and playing every week.

“Hopefully we can have a successful year and win a few things.”

Adriano : Barcelona Waiting For The Arrival Of Cesc Fabregas! Arsenal Midfielder Ozil Ruled Out For 12 Weeks With Knee Injury Antoine Griezmann Has No Regrets Turning Down Arsenal