Premier League club Arsenal pulled off a major victory when beating Borussia Dortmund 1-0 in the Champions League on Wednesday night. 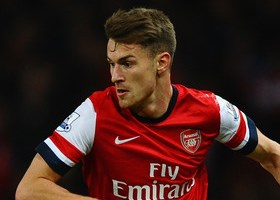 Wales international Aaron Ramsey scored the only goal in a classic smash and grab triumph at Signal Iduna Park.

The win ensured that the Gunners remained top of their group in Europe’s premier club competition and Ramsey was ecstatic after a tough win away from home.

The 22 year old told Sky Sports : “It was a great achievement from the lads. It is always a difficult place to come. We realise that from the last time we came here and drew 1-1,”.

“They got to the final last year and were unlucky and they are a strong team so we had to do our defensive work.

“We were very good defensively even though we didn’t have any shots in the first half and they had a few, even if it was from distance.

“We kept our shape really well, we were patient and it was a proper away performance from the lads and we got them on the counter-attack.” Mikel Arteta Admits Arsenal Must Finish On A High