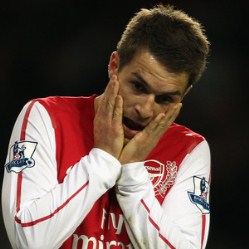 Aaron Ramsey is delighted with his progress this season.

The Arsenal midfielder plans to become even more influential in the New Year.

“I’m happy with what I’ve achieved so far, and especially with the way things are going for me personally this season, but hopefully there’s a lot more to come,” Ramsey told the Official Arsenal Matchday Programme.

“What happened with my injury is behind me now, and I’m just really glad to be back playing for Arsenal regularly. Before my injury I was just starting to do that, so it’s just nice to be out there every week again.”

“I still have plenty of things to learn, but with any luck I’ll be able to bring more to the team in 2012.

“Against Aston Villa I looked a bit fatigued and was disappointed with how I performed, but then I’ve played a lot of games this season and sometimes it catches up with you. I think it was the right decision [to rest me for the Wolves game], because I did feel a bit tired, so hopefully a rest has done me good.”