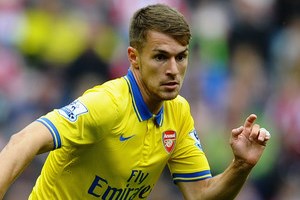 It is already the most prolific season of the 22-year-old’s career and Wenger is delighted to see him fulfilling his vast potential.

Wenger told Arsenal Player : “Yes of course [this is the best spell of his career],”.

“I must say it is expected. Why? Because he is a young player and it is normal that he goes [up] and not the other way.

“Secondly, he has a huge desire to improve and I think that when you have this kind of attitude you shouldn’t expect any limitations. You should expect to always become stronger.

“It is down to composure, especially for example the second goal [at Sunderland]. His first touch was perfect, then he could finish well, and that’s where I believe he has improved a lot.”