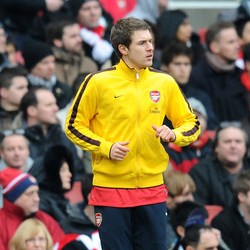 Arsenal midfielder Aaron Ramsey has declared that he is not haunted by the memory of his broken leg.

The 20 year old Welsh international came on as a substitute in Arsenal’s 2-0 defeat to Manchester United as the Gunners crashed out of a third cup competition in the space of a fortnight.

Ramsey said in the Daily Mirror : “It was great to pull the Arsenal shirt on again and play some part in the game,”.

“It’s been a long time since I played for Arsenal. It was a disappointing result, but from a personal point of view it was great to be back.

“It hasn’t been a great week. We’ve gone out of two competitions and before that we lost the Carling Cup final. We need to bounce back, concentrate on the league and hopefully we can win that.

“Hopefully I can kick on with Arsenal. The injury has all gone and I’m nearly back to where I was. The thought of the injury doesn’t go through my mind at all during any game. I just concentrate on the role I’ve got to play and try to get the points we need.” Arsenal Blow As Kieran Gibbs Ruled Out Of Burnley Clash