Aaron Ramsey has admitted that Arsenal are growing in self-belief with every big win.

The Gunners is set to face Premier League champions Manchester United at Old Trafford this weekend on the back of a hugely-impressive 1-0 away Champions League victory at Borussia Dortmund. 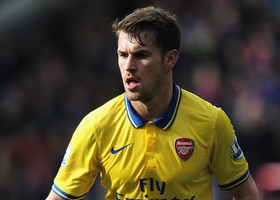 The Wales international said : “It was no easy task to come here and get the win. We will take an enormous amount of confidence from that and hopefully that will put us in a good position now to kick on and have a really successful season,”.

Asked if the Gunners have anything to fear from playing at United, Ramsey insisted: “Absolutely not. They have had a bit of a rough start, but they have overcome that now I think.

“They have had a few good results in the league and will be getting their confidence back up, but we are really confident ourselves.

“Our away record has been really good so hopefully we can continue building on that.

Ramsey added: “We had a fantastic run-in to last season and after the disappointing opening game of the season, we have managed to build on that and keep it going.

“Hopefully we can do that up until Christmas and then we know we have the ability to compete.”