Arsenal midfielder Aaron Ramsey is convinced that the club are set for a golden era of trophies. 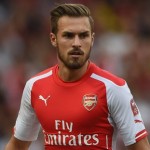 The Wales international declared that the Gunners can’t wait to get their hands on more silverware after ending their nine-year drought by lifting the FA Cup last season.

And he reckons their Wembley win could kick-start an Arsenal trophy rush.

The 23 year old said: “The FA Cup was the first thing we’ve won with this team. It could be the most important one.

“We want to try and win things this year and we believe we have a great opportunity of doing that.

“We have got over that hurdle of not having won anything for many years we have finally put that to bed and won the FA Cup.

“Now we want to build on that.”