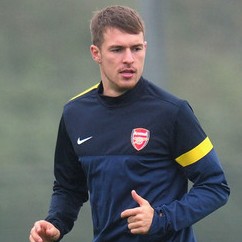 It has been reported that Aaron Ramsey is anxious for Arsenal pal Jack Wilshere to return to first team action.

Although he is not on the bench for tonight’s Champions League clash with Schalke, Wilshere will be in the Gunners squad for QPR on Saturday.

‘Rambo’ Ramsey, who broke his right leg in six places in 2010, said: “He’s been out for a long time and I’ve been through a similar thing. I’m happy to see him playing again.

“There’s nothing worse than being out for that period of time.

“We haven’t really had a chance to play together. He went out on loan, I got injured, he got injured. I’m looking forward to it.

“He’s a gifted player, one any midfielder would like to play with.”