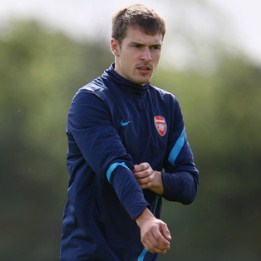 The Gunners take on the reigning German Bundesliga champions at Signal Iduna Park.

However Arsenal will face Jurgen Klopp’s men without the Wales captain as he has an ankle injury sustained at training today.

Arsenal boss Arsene Wenger : “I think Aaron Ramsey has been very influential in our team since the start of the season, but it is a good opportunity to show that we have now a big squad, and that we can cope with it,”.

“We have of course three midfielders out with (Abou) Diaby, (Jack) Wilshere and Ramsey and it’s many but we still have hopefully a strong midfield tomorrow.” Newcastle United Drop Out Of Race To Sign Taye Taiwo