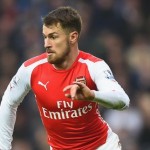 It has been reported that Arsenal boss Arsene Wenger is concerned Aaron Ramsey will miss their busy Christmas period.

The midfielder suffered a hamstring strain in the thumping Champions League victory over Galatasaray earlier this month.

At the time Ramsey suggested his withdrawal at half-time was a ‘precaution’ but it now seems the Welshman will be sidelined until the New Year.

Asked about the 23-year-old’s problem, the Arsenal boss said: “I’m scared that he will miss the Christmas period. He should be back end of December, early January.”