It has been reported that Aaron Ramsey scored Arsenal’s 300th goal in European competition under Arsene Wenger on Tuesday night. 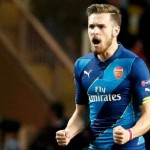 The Wales international midfielder fired home from inside the area after recovering a poor clearance from the Monaco defence in the 79th minute of the Champions League Round of 16 second leg.

The goal came after Olivier Giroud’s neat angled finish in the 36th minute to notch the Gunners’ milestone of 300 in Europe under the guidance of Wenger.

Despite the 2-0 win over Monaco, Arsenal were dumped from the Champions League on the away-goal rule after losing 3-1 at home in the first leg late last month.