It has been reported that Arsenal midfielder Aaron Ramsey hopes to be back for next month’s title clash with Chelsea. 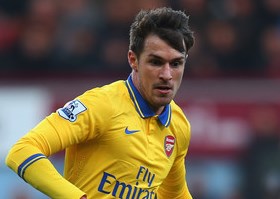 The Daily Mail revealed that the Wales international star was given the all-clear to step up his rehabilitation programme at the end of last week after returning from a week’s warm-weather training in Dubai.

The midfielder, arguably Arsenal’s outstanding player in the first half of the season, has been sidelined since Boxing Day with a thigh problem, which he aggravated when he returned to full training at the end of January.

He is now targeting Arsenal’s pivotal Premier League trip to Chelsea on March 22 for his return, which would be nearly three months after he last featured for the team.