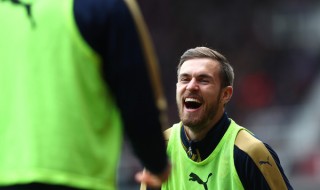 Reports are out claiming that Aaron Ramsey has admitted moving from Arsenal to Barcelona is something he would consider in the future.

The Gunners midfielder was most recently linked with a switch to Spain in January, with reports claiming that the Spanish giants may be willing to part with £60million to sign Ramsey.

“Barcelona play football very well and at Arsenal we want to do the same,” he told Marca. “I’ve said it before: I would to play in La Liga one day, at one of the big clubs.

“I watch the league every week. It suits my style. Maybe I will [move] someday, who knows what will happen in the future?”

He added: “I know that many people expect a lot from me and I want to eventually become one of the best midfielders in Europe, adding facets to my game and scoring more goals. It is a detail that I still need to improve.”

Arsenal Not Giving Up On Montpellier Striker Olivier Giroud