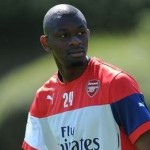 It has been reported that Abou Diaby enjoyed 45 minutes for Arsenal in their routine friendly win over Boreham Wood.

The 28 year old defensive midfielder has made just one appearance for the Gunners since March 2013 when he tore his cruciate knee ligament, a 14-minute cameo at Norwich on the final day of last season.

But after working hard to regain his fitness, the French international made it through the second half of the clash at Boreham Wood’s Meadow Park.

And he almost marked his return with a goal in the 57th minute but his fierce 25-yard drive was tipped over by James Russell, in goal for the hosts, managed by former Arsenal winger Ian Allinson.