Reports are out claiming that Abou Diaby is set to leave Arsenal after the injury-plagued midfielder was named on the release list by the Barclays Premier League. 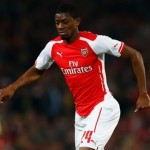 The 29-year-old Frenchman joined the Gunners from Auxerre in January 2006 but saw his progress halted by a horrific broken ankle following a tackle by Sunderland’s Dan Smith at the Stadium of Light in May at the end of that first campaign.

Despite making several comeback attempts Diaby continued to be hit by a string of fitness issues, the latest being a cruciate knee injury which sidelined him for 14 months, after which he made only one appearance last season, in the Capital One Cup tie against Southampton on September 23.

While clubs are required to list those players who are set to be out of contract after the submission deadline of late May, the Premier League stress it “should not be seen as definitive for players leaving their club.”