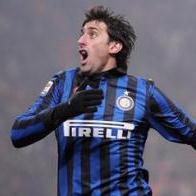 Milito continued Inter’s resurgence with a poacher’s finish nine minutes into the second half, but he was afforded the opportunity by a horrible mis-kick by Rossoneri defender Abate.

Milan had dominated possession but were unable to break down a wily Nerazzurri defence, with the ‘visitors’ sitting back and successfully exploiting the counter-attack on several occasions at the Giuseppe Meazza stadium they share with their city rivals.

The result means Juventus are top by one point from Milan, despite a disappointing draw at home to Cagliari, while Inter – who started the season dreadfully – stay fifth but move within a point of fourth-placed Lazio and, crucially, only six points behind Juve.

Eto’o : Balotelli Needs To Be Humble