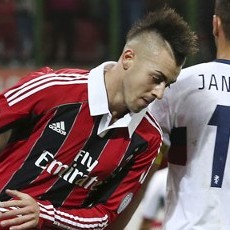 Stephan El Shaarawy’s goal against his former club was enough to earn AC Milan all three points against Genoa at a semi-deserted Stadio San Siro.

The Italy international decided a tense encounter in the 77th minute, resolving Milan’s immediate problems in Serie A, but leaving them still with plenty of margin for improvement.

Genoa lost their second game in a row to fall behind Milan in the table with the managerial switch from Luigi De Canio to Luigi Del Neri having no immediate impact.

In a game played in a ghostly atmosphere with many Milan fans voting with their feet against the club’s recent poor form, neither side managed to warm the hearts of the few present inside the San Siro.