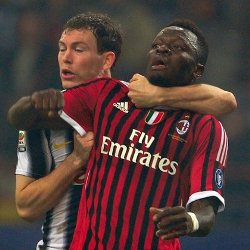 AC Milan and Juventus remain first and second in Serie A following their draw at the San Siro although both teams could feel aggrieved by refereeing decisions that may have cost them three points.

Antonio Nocerino put Milan ahead in the 14th minute and Sulley Muntari appeared to have doubled the lead midway through the first half when his header crossed the line but inexplicably it was not given.

Juventus then had the ball in the net 11 minutes from time but Alessandro Matri was wrongly adjudged to be offside before the same player scored four minutes later. Juve ended the game with 10 men after Arturo Vidal was sent off in the 88th minute for a challenge on Mark van Bommel.