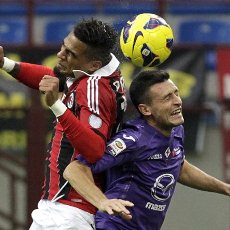 AC Milan’s mini-revival came to an abrupt end this afternoon as Fiorentina inflicted a fourth home defeat of the Serie A season on Massimiliano Allegri’s hapless side.

Following a dismal start to the season, things were finally starting to look rosier for the Rossoneri after a thumping victory over Chievo saw them climb into the top half of the table last week.

But Alexandre Pato failed to peg back Vincenzo Montella’s Viola before the break, missing a penalty after Alberto Aquilani managed to open his goalscoring account for the Tuscans.

Borja Valero then beat Christian Abbiati to give Fiorentina a two-goal lead but substitute Giampaolo Pazzini hit back on the hour mark to give Milan hope.

But there was ultimately no way back for a toothless Milan side when Mounir El Hamdaoui made the visitors’ points safe at the death with a long-range screamer.