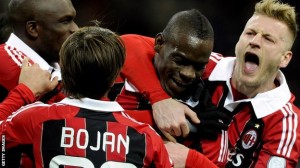 Mario Balotelli marked his return to Serie A by scoring both goals — including the winner in added time — in AC Milan’s 2-1 win over Udinese on Sunday.

Balotelli gave Milan the lead in the 25th minute at the San Siro by redirecting a cross from Stephen El Shaarawy at the edge of the box with one touch. Then after Giampiero Pinzi had brought Udinese level in the 55th, Balotelli put Milan back in front with a penalty four minutes into injury time.

“Playing for Milan was my dream and I’ll do everything possible to win in the face of those who thought I wasn’t worthy of Milan,” said Balotelli, who grew up cheering for the Rossoneri.

After cooly kicking in the winner, Balotelli held his arms out wide toward the crowd, as if saying, “Here I am.”