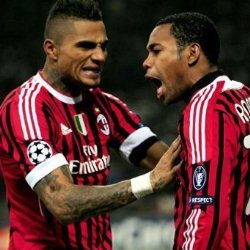 Arsenal’s Champions League dreams were shattered by a humiliating 4-0 defeat to AC Milan in the first leg of their last 16 clash at the San Siro.

Kevin-Prince Boateng fired the Italians ahead on 15 minutes with a sublime strike, before two goals by former Manchester City frontman Robinho and a penalty from the impressive Zlatan Ibrahimovic put the tie beyond the Gunners.

Arsenal never really settled and were punished for some careless possession – and not even the introduction of former captain Thierry Henry in the final game of his loan spell from New York Red Bulls could spark a fairytale comeback.

The heaviest European away defeat for Arsenal will be a bitter pill to swallow, but Arsene Wenger must lift his squad again for what is now a crucial FA Cup fifth-round tie at Sunderland on Saturday ahead of the Premier League derby with Tottenham – when the Gunners will look to keep alive hopes of qualifying again for the Champions League with a top-four finish.

Milan had not won any of their previous seven matches against English clubs, knocked out of the Champions League at this stage by Tottenham last season.

Robin van Persie : I Never Thought I Would End Up As A Main Striker!