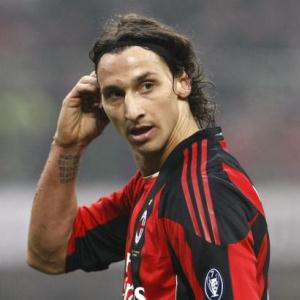 Leaders AC Milan drew 4-4 with Udinese in an epic San Siro encounter on Sunday while second-placed Lazio were beaten at home as the Serie A title race took a fresh twist at the midway point of the season.

Udinese took the lead on 35 minutes when Gokhan Inler’s shot hit the post and an onside Antonio Di Natale, the league’s top scorer, netted the rebound amid futile Milan protests.

The hosts hit back just before the break when the returning Zlatan Ibrahimovic crossed for Alexandre Pato to tap in his first goal since being hurt in November.

Udinese forward Alexis Sanchez, linked in the media with Inter, headed in at the near post after halftime and Di Natale scored his second before an own goal by Mehdi Benatia and Pato’s second after Antonio Cassano’s assist put the hosts level.

German Denis thought he had won it for Udinese a minute from time but Ibrahimovic struck an injury-time equaliser after another sublime pass from new signing Cassano had the San Siro faithful jumping for joy.