It has been reported that AC Milan have put Mario Balotelli up for sale at a price of £29.5 million. 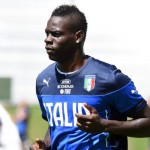 Sky Italia says Balotelli’s agent and Milan’s Adriano Galliani reached an agreement yesterday to sanction the move, and he is now free to discuss terms with the Gunners.

Wenger will look to lure Balotelli to the Emirates with a contract worth £180,000-per-week.