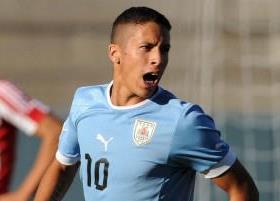 Reports are out claiming that Penarol whizkid Kevin Mendez is becoming one of the hottest young transfer properties in the world market.

The 17 year old Uruguay youngster has been likened to Juventus striker Carlos Tevez and has attracted an approach from Barcelona.

However, Montevideo media sources say Mendez is also being followed by AC Milan.

Mendez is already a first-choice with Uruguay’s U21 team.

Ignazio Abate Linked With A Move To Fiorentina