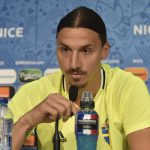 The Swede is expected to join Manchester United in the coming days.

However, Sportmediaset says if a Chinese takeover of Milan goes through, the Rossoneri will return to the negotiating table.

It’s claimed the Diavolo would be willing to offer a salary of €11m for one season, but that would be dependent on a sale.

The news outlet asserts that Ibrahimovic will wait for a week, as the exclusivity deal with the Chinese consortium is due to expire, and the aim is to agree a sale by June 30.