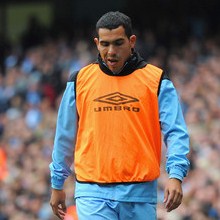 Reports have emerged that AC Milan are closing in on a deal for Manchester City rebel Carlos Tevez.

The Daily Mail reported that the striker saw a proposed move to Brazil collapse over funding and City refuse to budge on an asking price in the region of £40million.

That figure has forced many of Europe’s top clubs to revaluate their approach, and Italian media now claims Milan have agreed a deal with Tevez and his advisors.

It is claimed that the six-month deal would earn Tevez £3m and would have the option of a further two years for the 27-year-old when it is assessed in June.

Alexandre Pato Out Of Copa America With A Dislocated Shoulder