It has been reported that AC Milan have confirmed talks with Atletico Madrid over a swap deal involving Fernando Torres. 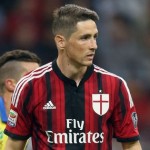 The Italian giants claims that negotiations are “advanced” to exchange Alessio Cerci with Fernando Torres at Atletico Madrid.

Milan Channel – the official television station of the club – announced on Christmas Eve that negotiations with Atletico for the deal are “at an advanced stage.”

Torres – who is on a two-year loan from Chelsea – would be loaned out to Atleti for the remaining 18 months of that deal. Cerci would come to Milan for six months.