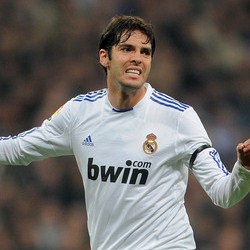 AC Milan insiders strongly believe that Real Madrid playmaker Kaka would welcome the chance to quit the Spanish giants and return to his former club.

According to Corriere dello Sport, the Brazilian international midfielder wants to return to the San Siro, where he would be guaranteed a big welcome back by fans, who were singing his name during victory over Napoli.

It is said that Kaka is excited about the prospect of playing with Alexandre Pato and Zlatan Ibrahimovic in an exciting attack – and feels more in synch with those two than former Milan teammate Ronaldinho.

The only concern for Milan staff at the moment is Kaka’s fitness.

However, if the 28 year old star can prove he is 100 per cent clear of his groin problems in the remaining months of this season, vice-president Adriano Galliani will move for the favourite son.