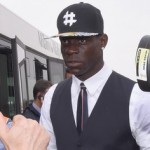 Reports are out claiming that AC Milan are slashing their asking price for Mario Balotelli.

The Daily Express reported that the Italian giants are ready to accept a bid of just £14.5m for Balotelli.

Arsenal and Liverpool were both interested earlier this summer, with some reports suggesting the Anfield club were lining up a £24m bid.

But after a lacklustre World Cup it seems that Balotelli’s valuation has dropped considerably. Luis Suarez To Quit Liverpool After The World Cup Arsenal Boss Wenger Wished Me All The Best – Benik Afobe