It has been reported that AC Milan are ready to hand Michael Essien a free transfer in January. 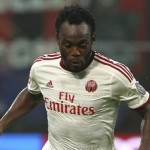 The former Chelsea star’s €3 million salary is proving a drag on the club’s finances and they’re keen to cut him loose, says Tuttosport.

MLS chiefs have made contact with Essien’s camp about a move to the US for the new season.

The Ghana international joined Milan in January, but has struggled to nail down a regular start.

Essien also had a year on-loan with Real Madrid.