Reports are out claiming that AC Milan’s signing spree is set to continue. 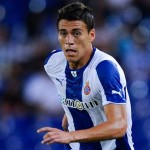 According to Marca, Milan are chasing Espanyol defender Hector Moreno.

Moreno has less than a year to run on his contract and Milan are eyeing the Mexico international.

Premier League giants Manchester United and Arsenal were also linked with a move for Hector Moreno.