Reports are out claiming that AC Milan have made contact with PSG midfielder Adrien Rabiot. 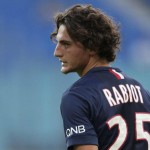 Rabiot’s mother, Veronique, has declared they’ve demanded a transfer from PSG in the past week.

“The possible destination is Milan and Italy? Now it is difficult to talk about the future, it is still too early.”

Rabiot was also linked with a move to the Premier League with Arsenal and Tottenham.