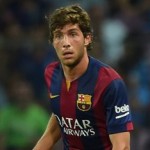 El Mundo Deportivo reported that Milan GM Adriano Galliani has made contact with the Spanish giants about Roberto’s situation.

Galliani is in the market for a new midfield playmaker and is keen to tempt the 22 year old to Italy.

The midfielder is regarded highly inside Spanish football, but his career is yet to catch fire while being part of Barca’s star-studded squad.

Roberto has also been linked with a loan move to a Primera Division rival.

Sergio Busquets Insists Real Madrid Can Have No Complaints