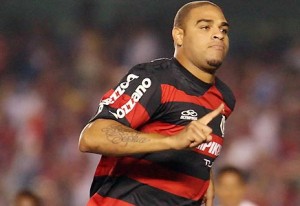 Interesting news from the Serie A is out and it has been reported that AC Milan are laying the foundations for a shock move for Flamengo star Adriano.

Local Italian newspapers have reported that AC Milan vice-president Adriano Galliani had scouts check on Adriano last week, well aware that he is the championship’s top scorer this season.

Interestingly, the former Inter striker has not sold his villa in Como and when asked about the interest of Milan, Adriano’s agent, Gilmar Rinaldi, replied that Adriano could definitely join Milan and why not.

It is worth noting that players like Andrea Pirlo, Beppe Favalli and Clarence Seedorf have all made the move to AC Milan after previous experience at Inter Milan.