Reports are out claiming that AC Milan are eyeing Tottenham defender Jan Vertonghen. 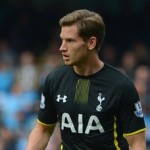 The Belgium international’s camp have refused to rule out him moving on after he lost his first-choice status this season under manager Mauricio Pochettino.

Indeed, Vertonghen was also overlooked for any role in the squad’s leadership group, though insiders insist it was the players who chose the skipper and vice-captains and not Pochettino.

Calciomercato.com reported that Milan are keeping a close eye on developments and weighing up a January move for the defender.

Milan coach Pippo Inzaghi is considering a new centre-half signing after failing to be won over by Adil Rami this term.