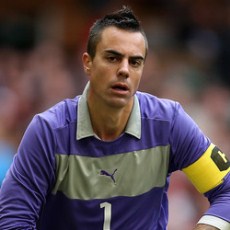 Transfer news from the Serie A has emerged claiming that AC Milan are keen on Wolfsburg goalkeeper Diego Benaglio.

TMW reported that Milan are tracking the Switzerland international as they seek a replacement for Christian Abbiati.

It is said that the 29-year-old could be available for around €7m as the Wolves continue to struggle in the Bundesliga having won just four games so far.