Reports have emerged claiming that Liverpool striker Fabio Borini is attracting interest from both AC Milan and Napoli. 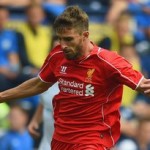 Reports suggest that the 23-year old Italian is wanted by the pair of Serie A clubs following his season-long loan with Sunderland last term.

The Reds have already signed Rickie Lambert this summer and are reportedly close to signing Mario Balotelli from Milan which may open a vacancy for Borini to fill at the San Siro.

“Napoli is a fantastic club, but I have never spoken to Fabio about this because they never called me,” he told Italian radio station Radio Crc.

“If Napoli did call? I am accustomed to listening to everyone, but that doesn’t mean I’ll accept any proposal.”