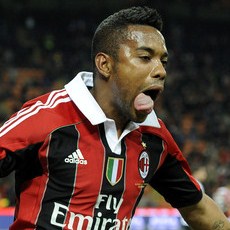 Reports are out claiming that AC Milan have rejected a bid from Malaga for Robinho.

It is said that the Rossoneri are seeking €20 million for the former Real Madrid and Manchester City winger.

Robinho is now emerging as the most likely star name to be sacrificed by Milan as they seek to balance their books.

If a deal with Malaga can be struck, Milan will turn to Catania striker Maxi Lopez as a cut-price replacement for the Brazilian.