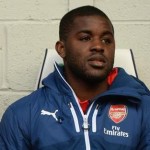 Reports have emerged claiming that AC Milan are being linked with Arsenal striker Joel Campbell.

After impressing in midweek against Galatasaray, Gunners boss Arsene Wenger insisted Campbell would not be leaving in January.

However, the Mail on Sunday reported that AC Milan are thinking of taking Arsenal’s Costa Rican forward on loan in January. Ronaldinho To Be Benched Again