It has been revealed that AC Milan remain keen on Chelsea midfielder Cesc Fabregas. 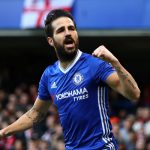 Calciomercato.com says Milan will go back in for Fabregas at the end of the season and try and tempt him away from Stamford Bridge.

Fabregas marked the 300th Premier League game of his career on Saturday with a goal and man-of-the-match performance in the 3-1 win over Swansea.

Fabregas has insisted he is happy with his bit-part role under the Italian but the promise of regular football in Italy could change his mind.

The £622million sale of the club to Chinese investors is set to be finalised on March 3 and the club will go all out to sign elite players from around Europe.